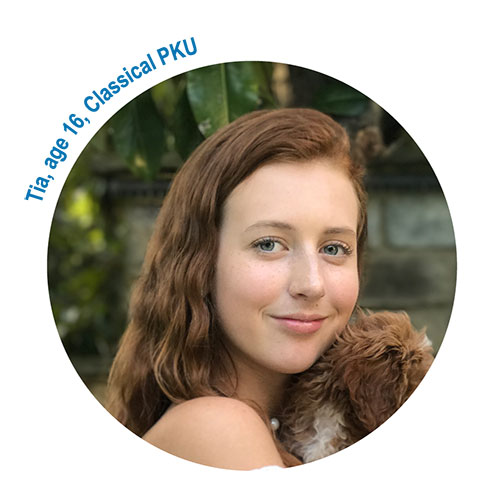 It all started with one life-altering phone call from a doctor….

Imagine the joy of the birth of your first child, long awaited and arriving robust and beautiful. Then imagine 48 short hours later receiving the news that your precious newborn has a rare metabolic disease and that without unimaginable dietary restrictions she will become severely intellectually disabled in less than a year. This rare disease is called PKU. This is what Tia was born with sixteen years ago.

Phenylketonuria (known as PKU) is an inherited metabolic disease affecting the brain. People living with PKU cannot process a substance called phenylalanine (Phe) and as a result, Phe is toxic to their brain. Phe is an amino acid that is a building block of proteins and is found in all proteins, in most foods, and artificial sweeteners.

PKU infants are diagnosed in the first few days of life through the federally required Newborn Screening Program. Those infants are immediately placed on a restrictive, low protein diet consisting of medical foods and special formula to limit the amount of protein (Phe) they eat. This diet is for life. Frequent blood tests measure the amount of Phe in a child’s blood to work towards preventing health problems. When an infant or adult is untreated or poorly treated, Phe rises to high levels in the blood and can irreversibly damage the brain causing severe neurological complications, including IQ loss, memory loss, seizures, severe learning and physical disabilities, and emotional problems. In addition, it has been shown to cause low bone density, still allows for Phe to reach the brain, impacting important brain functions, and makes it very difficult for women with PKU to have children. There are roughly 16,500 people living with PKU in the United States today.

There are two types—hyperphenylalaninemia (mild PKU) and Classical PKU, the most severe, which is the type that Tia has. Because it is a very rare disease (1 in 12,000 babies) it is considered an “orphan disease” and the burden of funding therapies and a cure fall to those families and individuals who care passionately. The highly restrictive diet is the only treatment today considered effective for PKU, but we are not satisfied with this nutritionally void diet—IT IS JUST NOT ENOUGH, IT IS NOT EVEN SATISFACTORY.

Join this adventure to help fund a cure!

This February, I am mounting cross-country skis at the Sweden/Norway border, crossing Norway west in nine days. Hauling a sled, I will ski nine hours each day and sleep on the snow at night. I am doing this for my daughter Tia who was born with the rare disease, PKU.