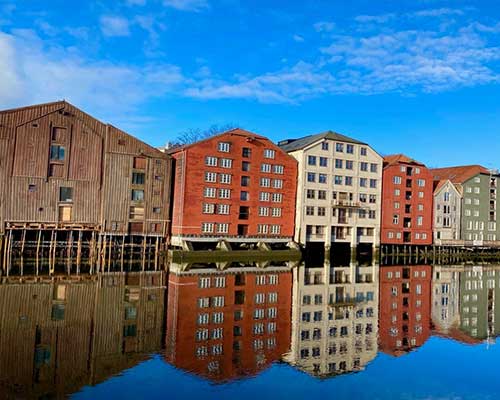 I never made it to Bergen! Mother nature had a different plan.

In an effort to stay positive, I will not recount all that happened, but the bottom line is that a large avalanche took out the train tracks in front of us just east of Voss, and by a narrower margin than I care to dwell on. The avalanche also took out the power lines down the tracks in the only direction we could go for miles and miles. Seventeen hours after boarding the train from Oslo to Bergen, I got off the train back in Oslo. It was a seventeen hour ride to nowhere. A Norwegian man pointed out to me, “At least the avalanche did not get us!” THAT is a difference between Norwegians and Americans: the silver lining- they always point it out. I love that tendency!

I did however make it to Trondheim yesterday to finally meet up with my mom. It’s a beautiful, waterfront city with a major University and a young, hip vibe. It is the food capital of Norway with more Michelin starred restaurants than anywhere else in the country. We had the best meal I’ve had in Norway last night.

Michelle Pernsteiner just texted me that we passed $1million for research.

It is really shocking to absorb that number. I had no idea what this project had in store. The projections you can make on a gala are far more accurate than something like this. I never thought we would raise this much. I also never thought the awareness building would be as successful as it has been. I believe this story is compelling because Tia and I have done our best to represent the PKU community, and the real struggles that exist whether it is dealing with the difficult diet and lack of understanding around a rare disease, or the unaffordability of the PKU foods and formula. This story also highlights a mom’s love. It shines a light on an important person in history and sets a specific target for the future: cure PKU. I believe we have touched thousands of new people with this story through newspapers, magazines, social media, TV and radio.

I am overwhelmed with gratitude as I get ready to leave. The list is too long to spell out here, but my family, dear friends, the US and Norwegian PKU communities, the greater rare disease community, and perfect strangers, have all made huge a difference through donations of time, goods, funds, sharing kind words, love and support.

Thank you for reading and sharing your time with Crossing Norway for a Cure. See you on the other side!! Xo, Alison

There are no upcoming events at this time.