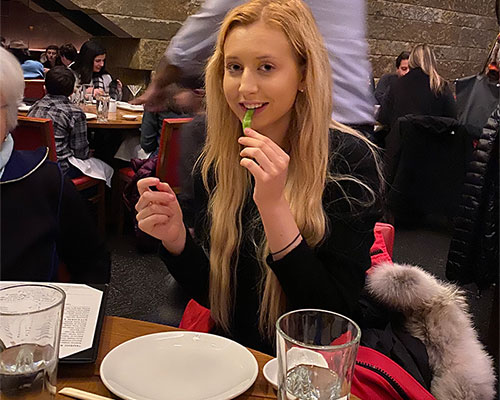 I re-read this article today and it is crazy to think about where we have come from. So much changed in Tia’s life and in our lives, yet again, in the course of a phone call…

»» For These Kids, Following This Diet Is a Matter of Life or Brain Damage

It was Monday, December 16, 2019, and eleven and a half weeks since Tia started the new PKU injectable drug called Palynziq. This is a shot that she has been giving herself every day in her stomach since September. Sometimes it made her feel awful. It was painful going in and stung for a long time after. She endured headaches, bruising, some joint pain and a rash at the injection sites. Patients who take Palynziq have to be observed for one hour after the injection. It’s not easy and she almost gave it up in early December.

Danie, our amazing dietician at Children’s National Medical Center, texted me that day saying to call her together with Tia on speakerphone. The news she shared with much excitement was that Tia was, in fact, responding to Palynziq. No PHE (the bad part of protein that damages her brain) was detectable in her blood- period.

This was a monumental message after years of monumental efforts- 16 years to be exact.

Our first call was to my mom and dad who had worked tirelessly with the National PKU Alliance to push the most promising research. My parents have given so much of their time, resources and love to the PKU community and Tia.

My mom ran over to our house in tears. Tia was crying tears of joy.

I called Kai, Sassy, Rob. I reached out to everyone on Team Tia. The news spread fast amongst friends in Washington DC who had for years supported our fundraising efforts and supported Tia through the struggles of managing a difficult disease.

To put this in perspective, Tia has lived her life essentially feeling like food could cause brain damage, fearful of “normal” food, unable to enjoy most foods we eat, feeling hungry, feeling pretty crummy on a daily basis. All of that was lifted in one phone call. I cannot adequately describe how surreal that is.

Danie advised us to give her a higher protein dinner that first night and she set a new daily goal of 20 grams of protein per day. By comparison, Tia had been limited to 6-7 grams of protein in a day for as far back as we could remember.

What followed over the next few days was a series of meals you would probably feed to a 7 or 8 year old. Was Tia reliving the kid years she missed food-wise? Maybe.

A Christmas miracle had occurred for our family. It is the best gift I could have imagined for Tia at this point in her life.

Most meals have been “firsts”: first time eating yogurt, ice cream, pizza, regular rice, bacon, shrimp, edamame, English muffins, pancakes, croissants, eggs, black beans, etc. Even ORANGE JUICE! Orange juice was too high in protein before and now she can have it. It’s fireworks at every meal. It is pure joy to watch.

Every 2 weeks since that initial phone call, Tia has been bumped up in terms of daily quantity of protein to consume, and she is currently allowed to consume 50 grams of protein in a day. We still take her blood draws once a week to check her PHE levels, and to this date PHE remains “undetectable”. Amazing!

Her protein target may go up even more, and she is down to drinking just one PKU formula a day, where she used to have four. She will probably stop drinking formula all together in the next month.

Other changes I have noticed: Tia seems joyful, her eyes are happy. She has more energy and sleeps better we believe because her food sustains her better. I realize now that there had been a bit of (gulp) suffering in her eyes for years. Her anxiety is much better, and she says it is like a fog has been lifted in terms of thinking clearly.

We are so grateful to all that helped our community get here. We are literally living the fruits of scientist’s and our community’s labor. Drug development takes years of perseverance, collaboration and savvy investment. Nine out of ten drugs fail to be passed by the FDA. It is a miracle our rare disease community has this drug as an option, and it works!

Now, Kai and I feel much better about sending Tia off to college knowing many of her restrictions have been lifted. Yes, she has to give herself a shot every day, but she says now “without a doubt, it’s worth it!!”

Lest anyone think Tia’s response to Palynziq changes our desire for a cure. Quite the opposite! We believe a cure is the best outcome for all PKU patients. Our Palynziq experience reminds us that it’s possible- anything is possible! Which brings me to Norway….it is now 4 weeks out and I’m feeling ready. BRING IT!!!