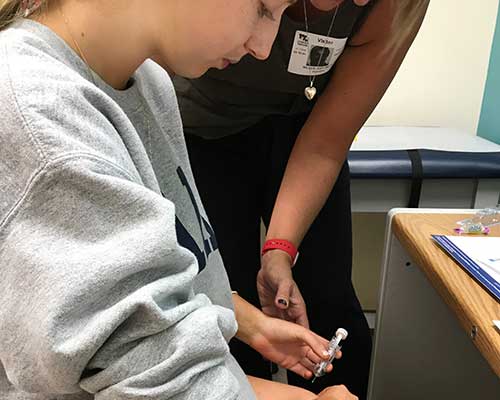 It was September 18, 2003 and I did not expect Tia’s first birthday party to unfold the way that it did.

Tia’s godmother, Mitzi Gaskins, got everyone’s attention at the end of the party. Mitzi stepped through the crowd of young mom’s and babies holding one of those giant checks that are presented when funds have been raised for a cause. These are the checks that say, “something big is happening.”

What I did not know, was that after Tia’s PKU diagnosis, Mitzi had been quietly asking friends from our UNC Kenan-Flagler business school class to donate funds for research so that Tia could have a better future.

The check she was holding amounted to a whopping $68,000 for PKU research.

Our family was stunned and overwhelmed with emotion. I still get teary thinking about what Mitzi and our dear Kenan-Flagler community did for Tia. We will always be grateful.

This was the nudge, not a small but a GIANT act of kindness, that has had a lasting impact on Tia’s life.

“Team Tia” (the Michaux/Piziali families) quickly realized that we needed somewhere to invest these funds. Research led us to Dr. Ray Stevens at The Scripps Research Institute in La Jolla, California where he was working on a molecule that should allow PKU patients to consume more intact protein with less effect on the brain and central nervous system.

Ray invited the whole family down to meet, including baby Tia. That visit kick-started a friendship and collaboration with Ray Stevens that still continues today.

Ray is a one-in-a-million researcher who invested the coming years not only in this drug’s development, but in our community as a whole; attending events, carrying out his own PKU fundraiser- a dangerous foot race across the Sahara desert, and serving on the NPKUA’s Scientific Advisory board. He has had a huge impact on PKU science!

With a rockstar like Ray in our corner, and the hope of what that drug could do for PKU patients, we left that meeting motivated to do more. The Michaux/Piziali families and friends, along with the PKU community, worked hard fundraising for Ray’s promising project for the next six years.

Why does this story matter?

This is incredible, unique, almost unheard of. Nine out of ten drugs fail to win approval, and the costs are astronomical, forcing pharmaceuticals to consider abandoning at most milestone junctures. It took 17 years to bring this drug, Palynziq, to reality. To be clear, many other PKU families, scientists, the NIH, the NPKUA, and of course Ray Stevens, played a huge role in that drug existing today. Our family played a small, but vital early catalyst role for what came later.

This drug is not perfect and it is not a cure. It is a complicated daily injectable and Tia may not respond to it. The shot is not quick to give, but hopefully it will become quicker for her over time.

Here is an idea of what taking Palynziq is like:

Palyzniq has to be refrigerated. It is important to remember to take it out 1+ hour before she injects to reduce the pain. Tia sets out her injection spot cleaning supplies, epi-pen, band aids and gauze pads. Then she injects in her stomach, thigh, or arm, making sure the spring in the syringe pops signaling all of the liquid is gone. She then waits to be monitored for one hour. The side effects list is long. Headaches have been her main issue to date.

Importantly, we recognize that this story shows that rare disease communities can, with hard work, consistent messaging and savvy investment, make it a real impact for their patients.

Because it is not a cure and the coming months, heck years, are unclear, we are still fighting for more treatments and a cure.

Norway is an ode to that fight. It is a part of this journey to a cure.

And…Mitzi is still fighting for Tia because she knows that without the help of friends, we would NOT have Palynziq, or a shot at a cure.